13/03/10. Well this one came out of nowhere! I had no intention of buying any more cars so when I got a call out of the blue during the week from a friend telling me he had just been told by a friend that his father was clearing 'a few old cars out' I thought maybe I could get a few parts as one of the cars being scrapped was a Fiat 500. I contacted the friend (Trevor) and arranged to see what he had today. There were cars burried under bushes everywere most of them in a terrible state. Trevor told me there was a couple of Fiat 127's, a 131, the 500 and a Panda. The 127's and the 131 were really bad. Any hopes of the 500 and Panda being savable were fading, Fast... they faded completely when I seen the 500.... 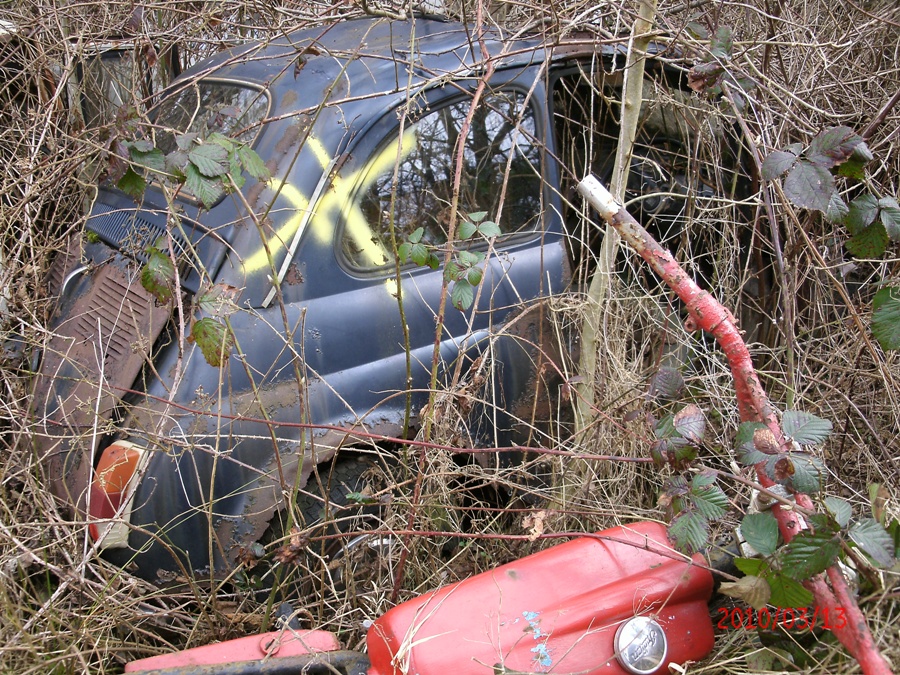 Did I really want to ask about the Panda! Trevor brought me through sheds, past boats, sheds full of engines and through more brambles and growing hedges into an area he had just cleared out, I was greeted with.................. 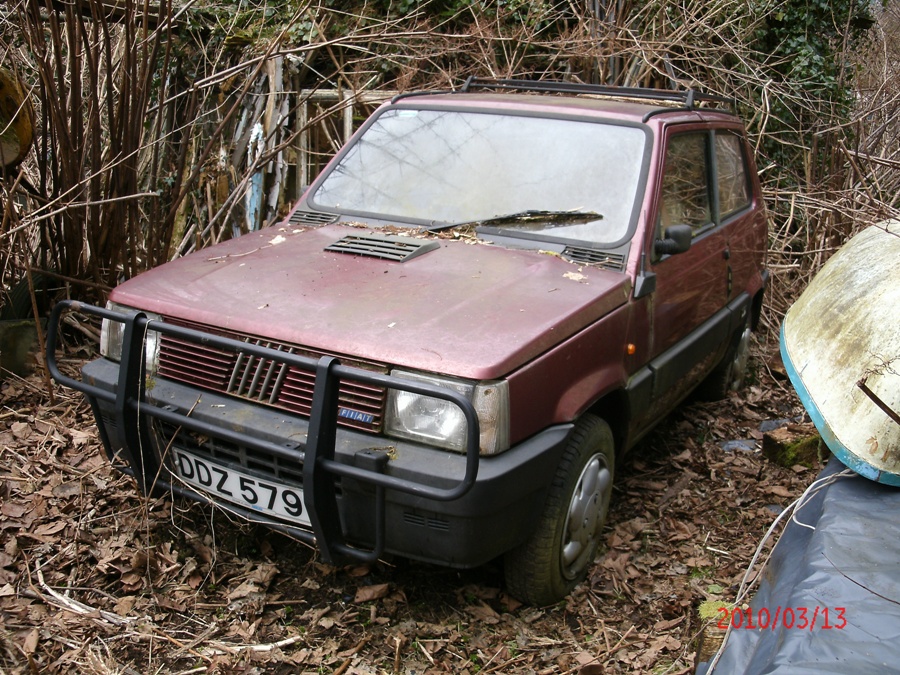 A Panda Sisley with only 33K from new, one owner (Trevor's Uncle) from new, locally sold new from dealer that had been only 10 miles from were I live! Not only that but it is completely original right down to the radio, bull bar and roof rack. I couldn't see this car going for scrap so a deal was struck there and then. The doors are pretty bad at the bottom and we couldn't get the bonnet open so I've no idea what lies under it or the floor but I will definately be restoring this car to as new condition and keeping it. I'll be bringing it home in a couple of weeks when I get few other things sorted. Oh and I took the remains of the 500 as well. 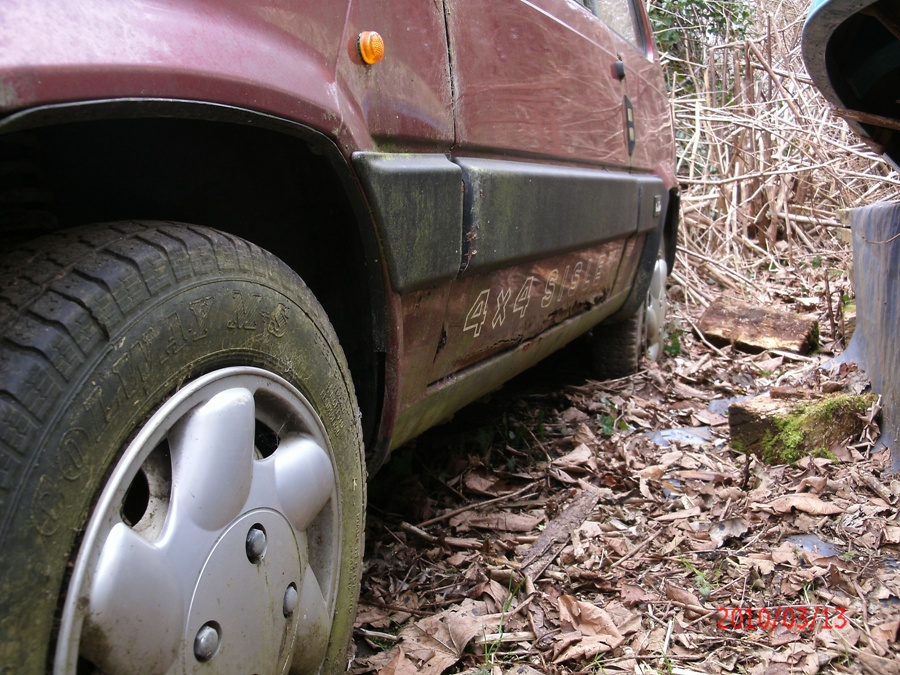 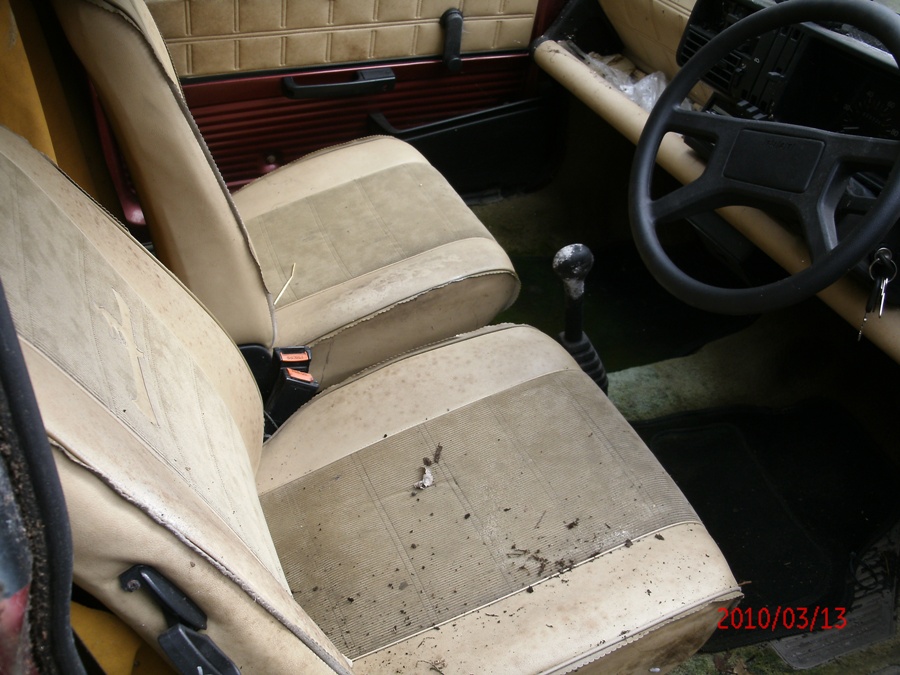 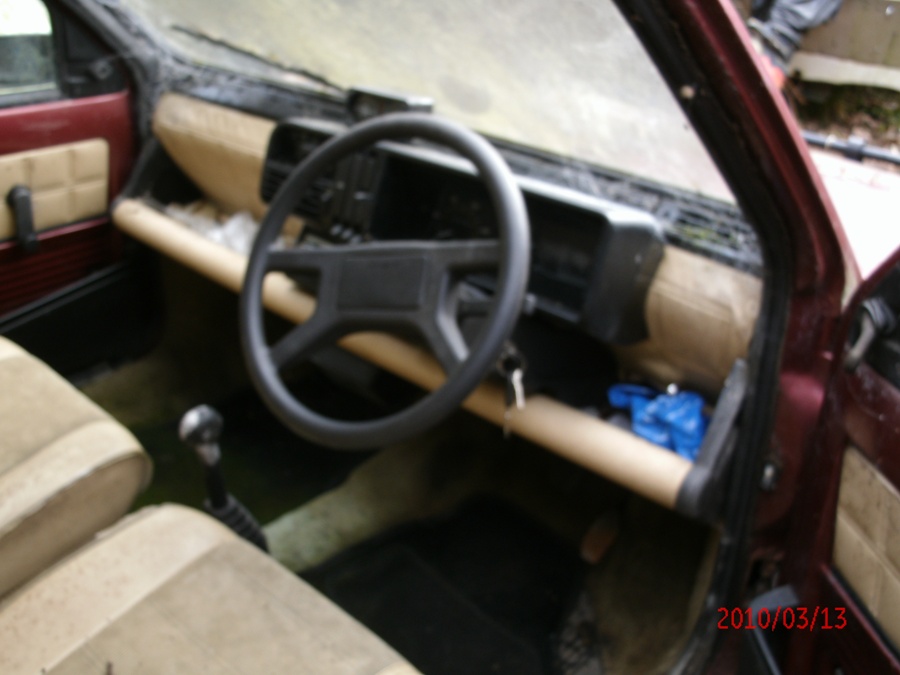 27/03. Went today to bring the Panda home. When we got there we were greeted with the site of the owner trying to get the car pulled out of the undergrowth using his jeep with little luck as the brakes were siezed on solid. So the first job was to get the wheels off, and remove the brake shoes and pads. 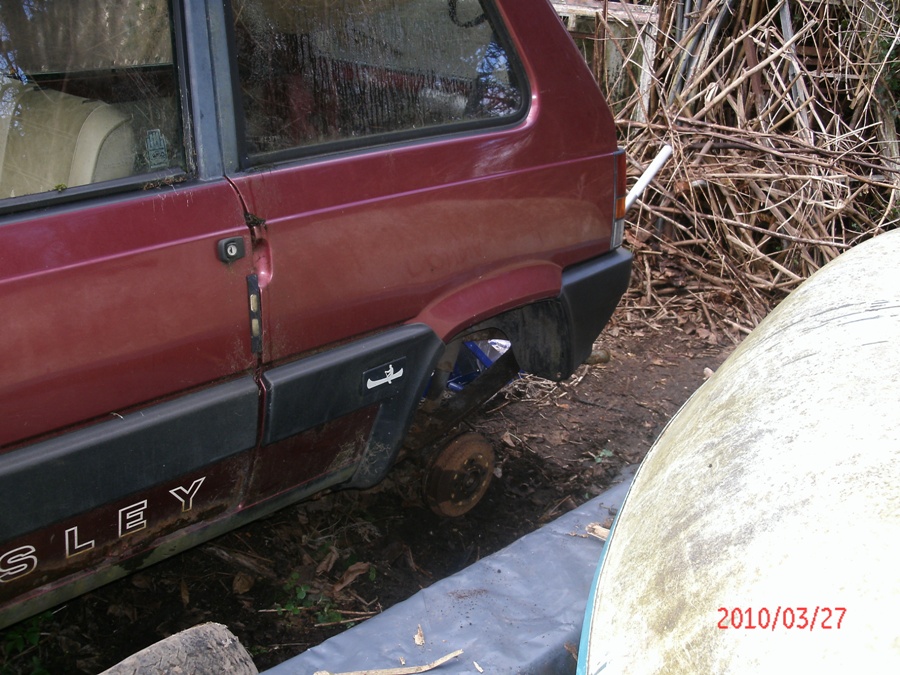 It didn't take to long to sort the brakes but the next problem was one of the tyres had a hole in it and was flat. No problem, the spare is in the engine bay. However the bonnet wouldn't open! A lot of WD40 and a prise bar later the catch eventually moved to allow the bonnet to pop. 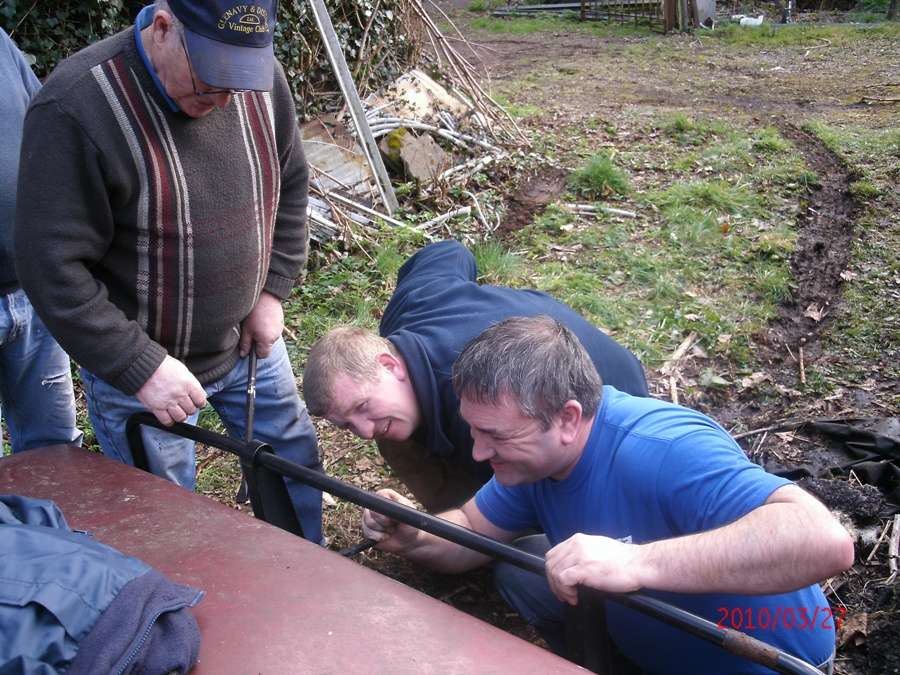 I'd been looking forward to seeing what was under the bonnet, and was very pleasently surprised to see what looks to be very little in the way of rust. I wasn't fussed about the animal bones left in there by a rat or the like. You can just see the bones in the top right of the photo. 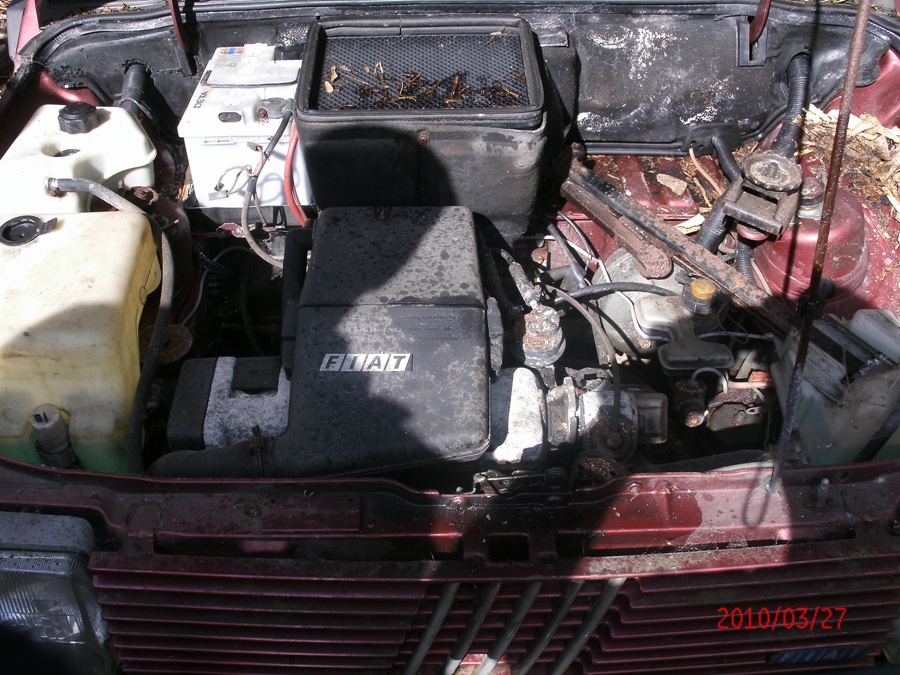 Wheels back on, we got the car out ready to go on the trailer. 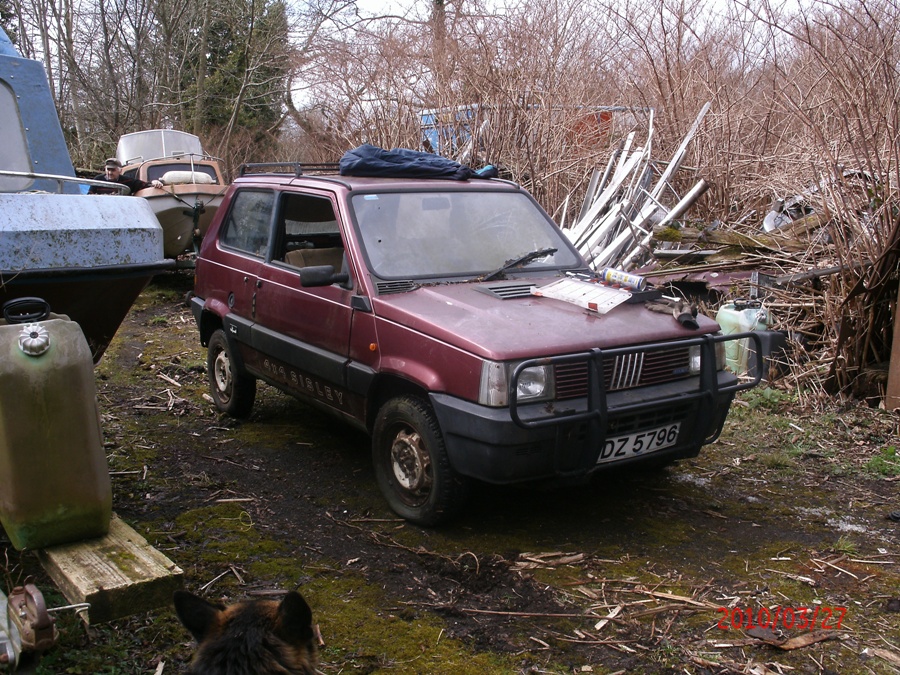 My Mate Damian's Father in-law kindly let me use his trailer and even came with us to help so it didn't take long to get the car onto it. 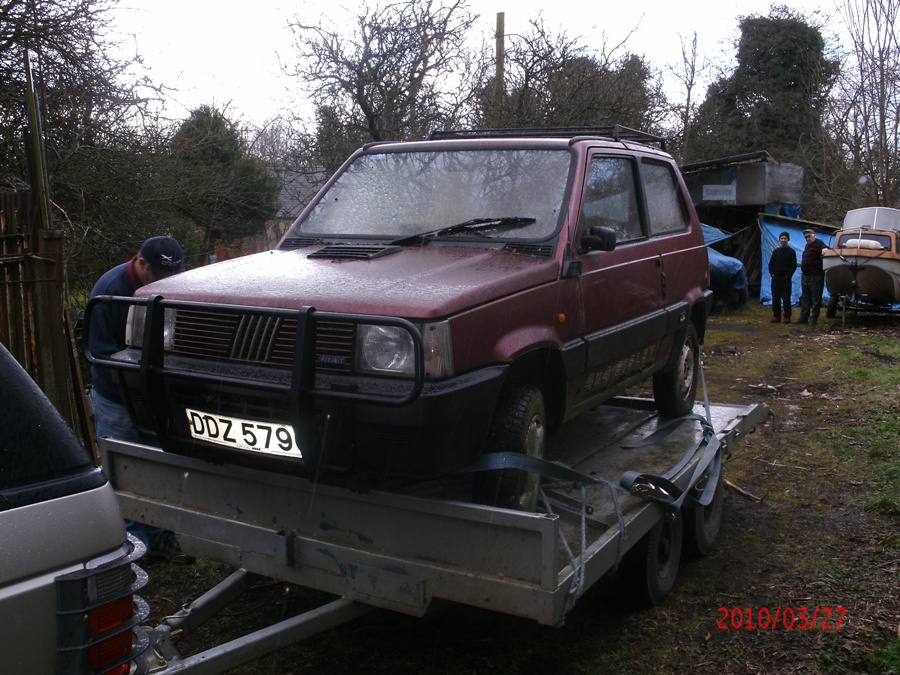 Bye-bye's said off we set for home. When we got the car back to the shed it was time to give it a quick once over. 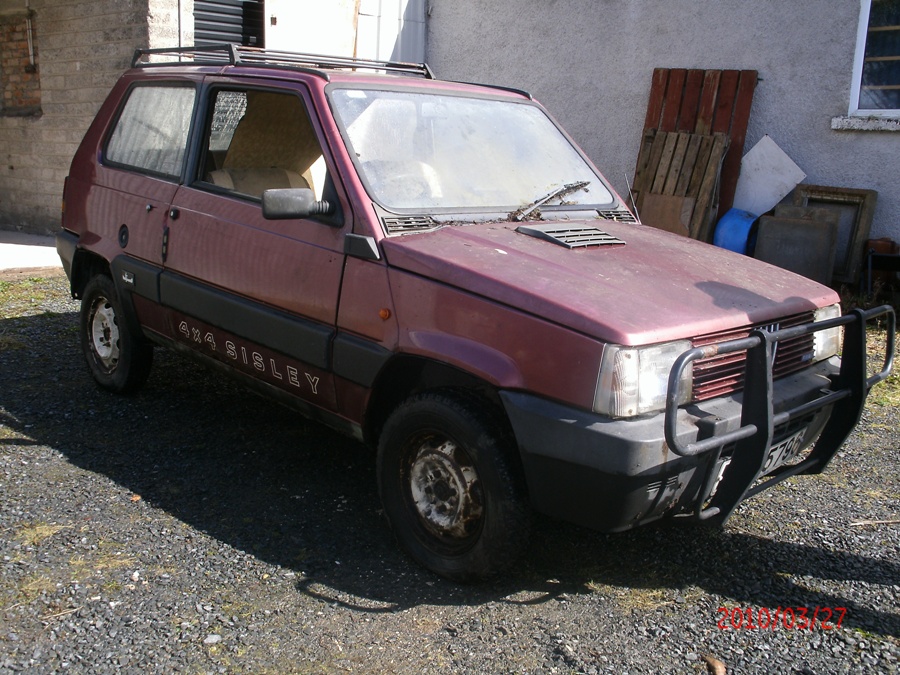 There are various bits of rust but the worst places are both doors and the drivers side rear wheel arch. 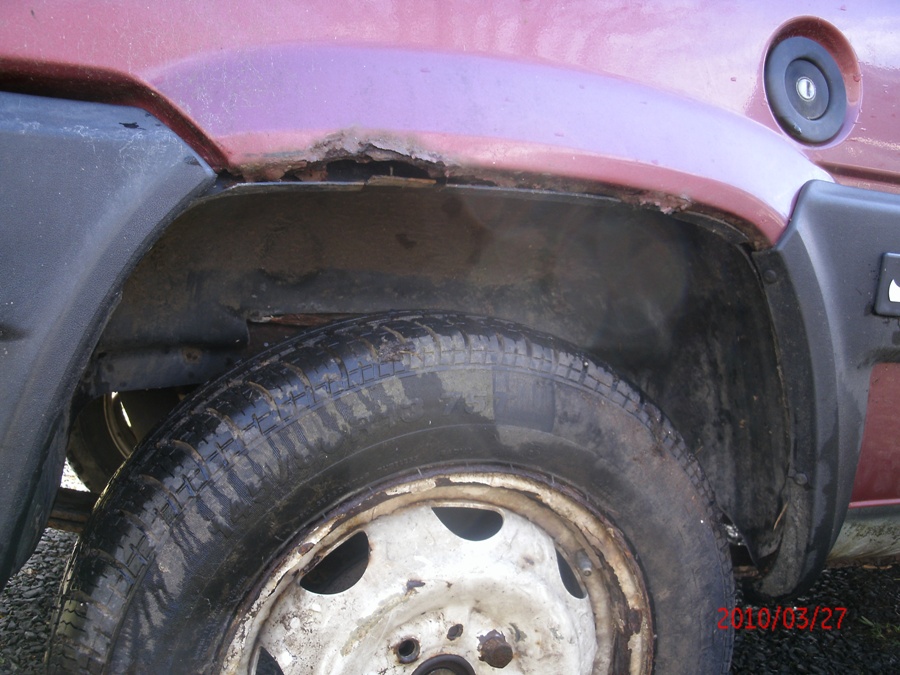 The engine is going to need a bit of work and a new clutch as it's siezed. Moving to the interior I was keen to see what damage the rear seat might have sustained due to the tyres that had been in there. I hadn't realised that it had been down so I was really really pleased to see no damage apart from being just a bit grubby. That was a relief. 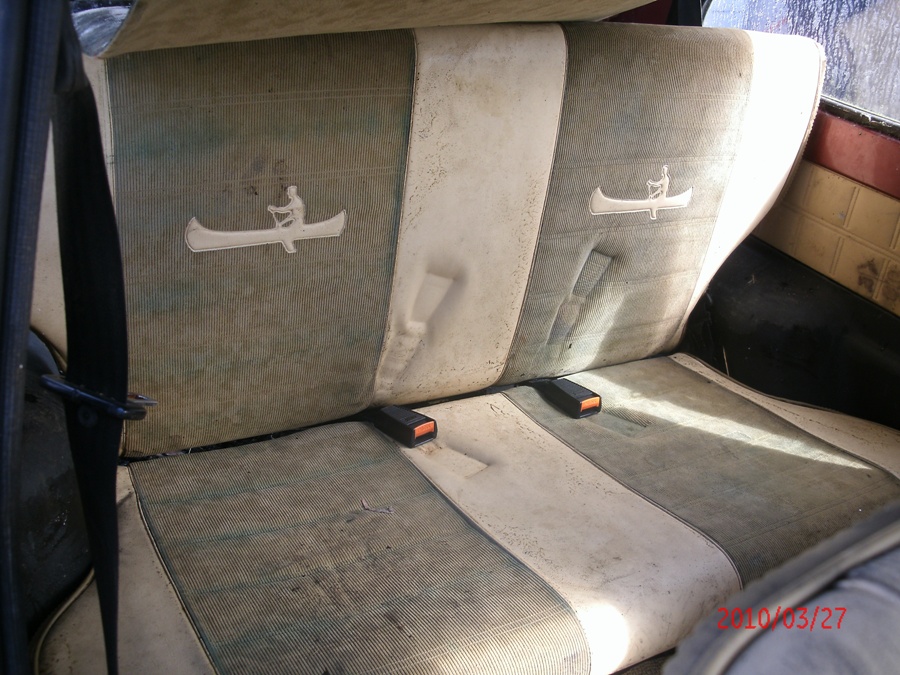 The front seats are good to with only a small nick to the bolster on the drivers seat, I should be able to get it fixed. The head lining is very damp and has dropped at the back so I'll have to take it out soon to stop it from warping. 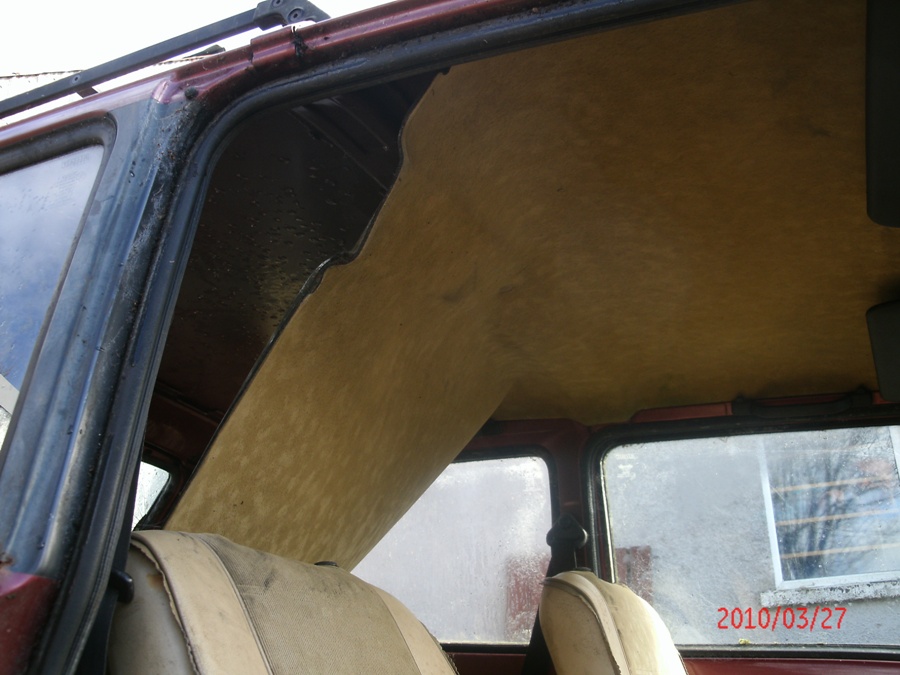 Apart from a few unwanted webs the dash is in good shape. 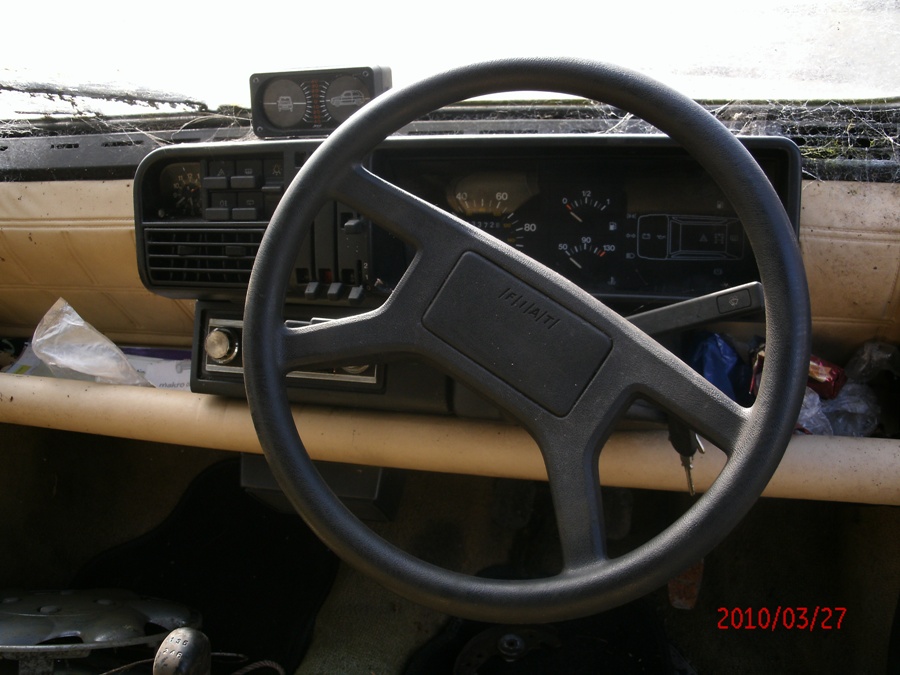 10/04. Bought a set of rear Sisley seat belts for the car. For some reason the belts in the car are just ordinaly ones. I'll keep an eye out for a front set to. While I was out with the car today I took the headcloth out to stop it warping. 01/05. Although I'm not starting the car until the new year possibly, I'm starting to gather anything that I think may be hard to come by. So when a set of decals for the doors came up for sale on Ebay I bought them. They arrived today. 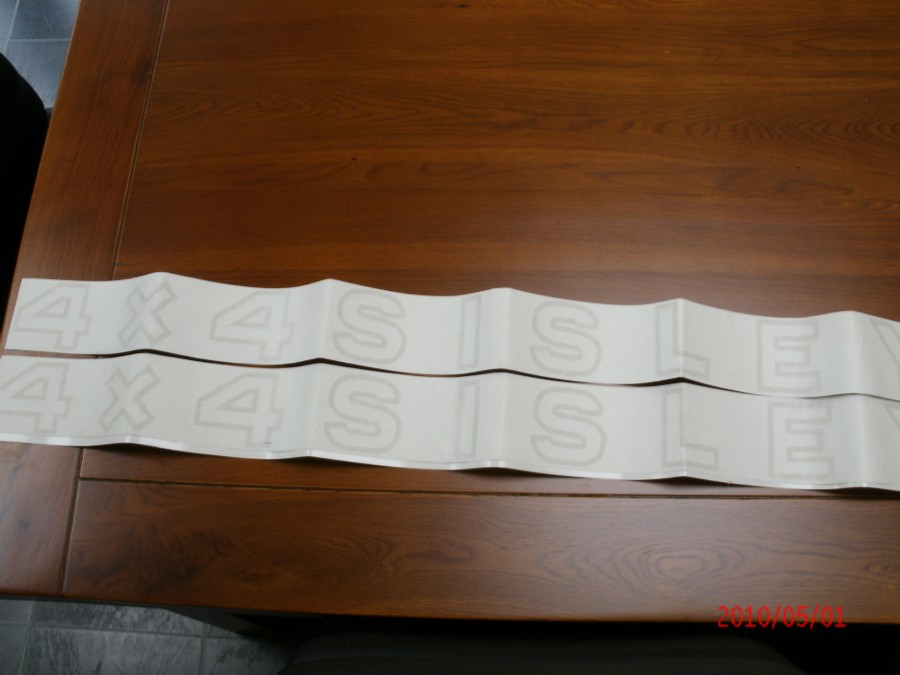 12/06. A couple of week ago a mate from Dublin contacted me to tell me he'd taken in a French 1999 Panda from a lady and he just wanted to move it on. The complete exhaust had fallen off it but apart from that the car was fine. I brought it home today and it was more than fine. It has excellent doors, bonnet and boot that will go to the Sisley and the MK1 will get it's windscreen. 08/07. I got a brand new full lock set with new keys from a friend (David) on the fiat forum. I'm really pleased with this find. I've more parts coming to but that's for another day. 16/07. I got an email last week from a man called Mike who had decided he was going to break his Sisley because it was to far gone to fix. He had seen my site and asked if there were any Sisley bits I would like for my car. Well a package arrived this morning with lots of little goodies and what a Gentleman Mike is. I haven't paid him yet. (Cheque was sent this mrning Mike). I know my car is the first of the Sisley's and shouldn't have the likes of the belts but I am going to use as much of the bits as I can. Thank you Mike, I'm humbled by your generousity and very chuffed. The support I'm getting for the Sisley build is starting to go the way the 127 Sport went. 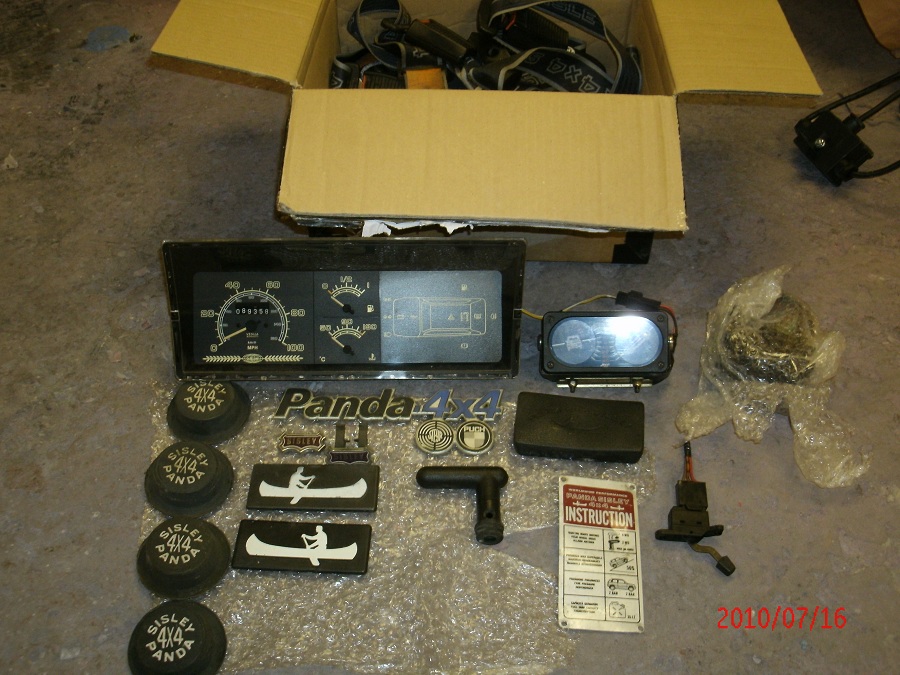 25/09. I had spotted a new set of front indicator lenses on Ebay that I couldn't resist, they arrived today. 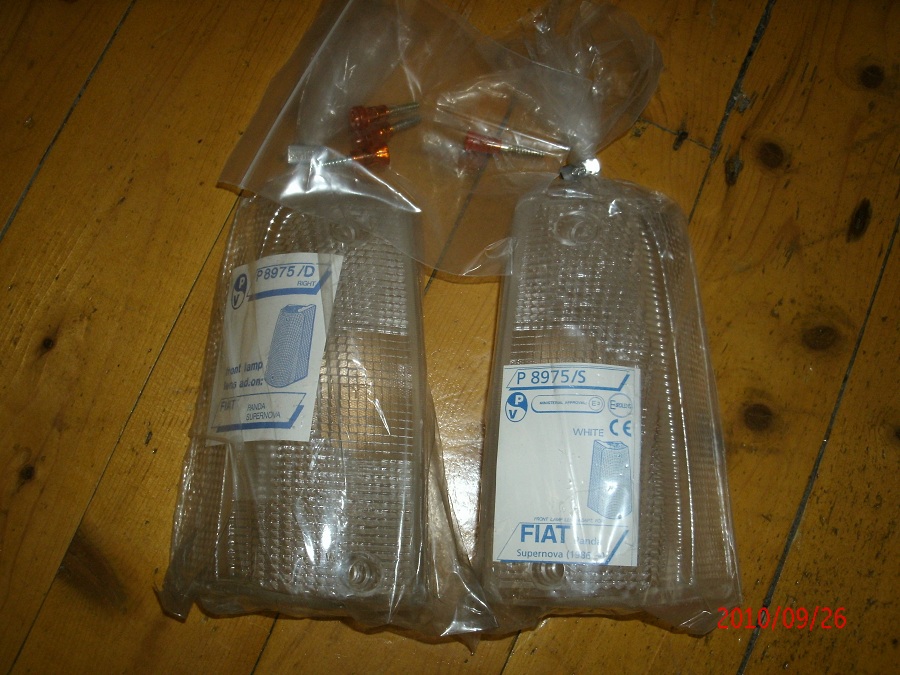 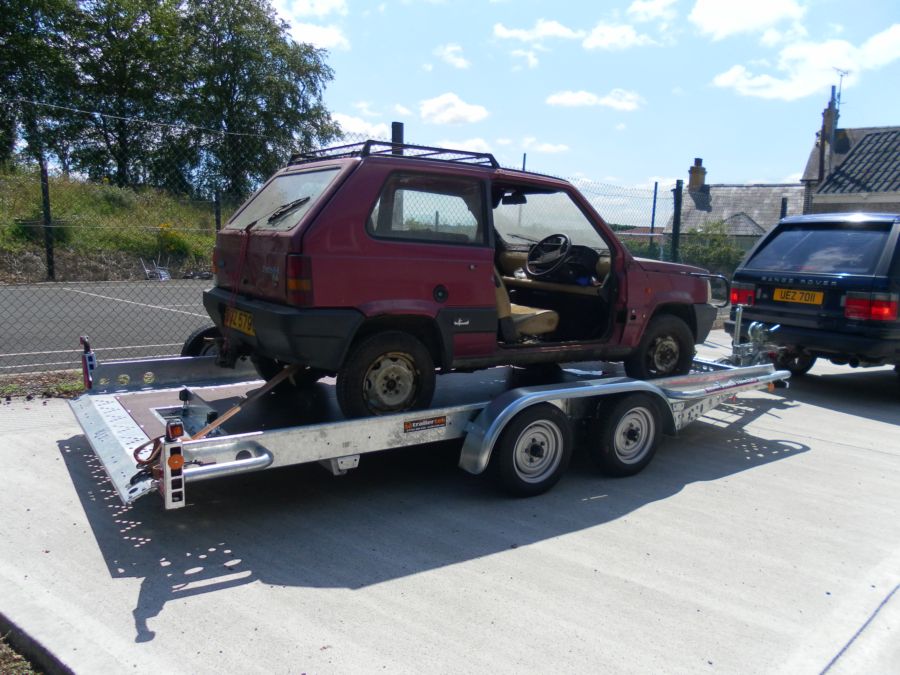