09/11/10. One of the guys from a local car Forum had this car sitting and as he hadn't the time to work on it decided to sell it. Luckily I was in a position to buy it as I've always liked the 155 having owned one before. So home it came tonight and was put straight into the garage to be worked on. it does have few issues. The main one being the injection light keeps coming on when you try any sort of excellerating and the engine tries to cut out. I know a man who should be able to sort it though and the heater despite making a lot of noise doesn't actually do anything. The other main thing at the moment in the paint has not only died but peeled off on the door mirrors and part of the bumper so I'm going to have to paint those bits. I'm not going to get to carried away making the car look like new as it is more a winter runabout but I don't need 2 runabouts so the Cinq is going to have to go.

13/11. Got started on the paintwork with the 1500 W&D, G3 and the polisher and I'm very pleased at the way the paint is coming back to life. Can you see the difference, front wing done but door not.

19/11. I got the car ready today for painting all the areas that are in need of refreshing. But first the rear spoiler had to come off and showed just how long the car has been standing with the amount of green mould on it.

The boot was in a bit of a state in one corner but overall is ok. I'm going to re-paint the top half of the boot.

It's a big Christmas pressie, no it's that car covered up with only the bits needing painting exposed.

31/12. End of year report. I've the car all painted but haven't had a chance to take any photo's as the past couple of weeks the weather has been the worst here since 1963. The paint job isn't the best I've ever done but I'm not to worried as the car is to be my winter car and the plan all along was to get it on the road and enjoy it. I've just the brakes, fuel injectors, a service and the interior to do in the New year and hopefully it will be on the road by the end of January.

Pretty straight forward. I had only one sticky caliper to contend with which I thought was pretty good considering the car has been off the road for such a long time. Fronts on.

And the rears on.

The car seems to be having a cut off problem with fuel which I'm hoping is a blocked injector so since I have a spare set of injectors I decided to change them over. I took the injector rail and injectors off.

And cleaned and painted the rail ready for the replacement injectors.

So once all was checked to make sure there was nothing outstanding I got the car out of the garage for the once over. It hasn't turned out to bad so far. Still the glass and interior to do but coming along nicely.

29/01. Got under the car this morning to check the brake pipes and was horrified at the state they were in, al of them. So off to the motor factors to get new piping and ends. 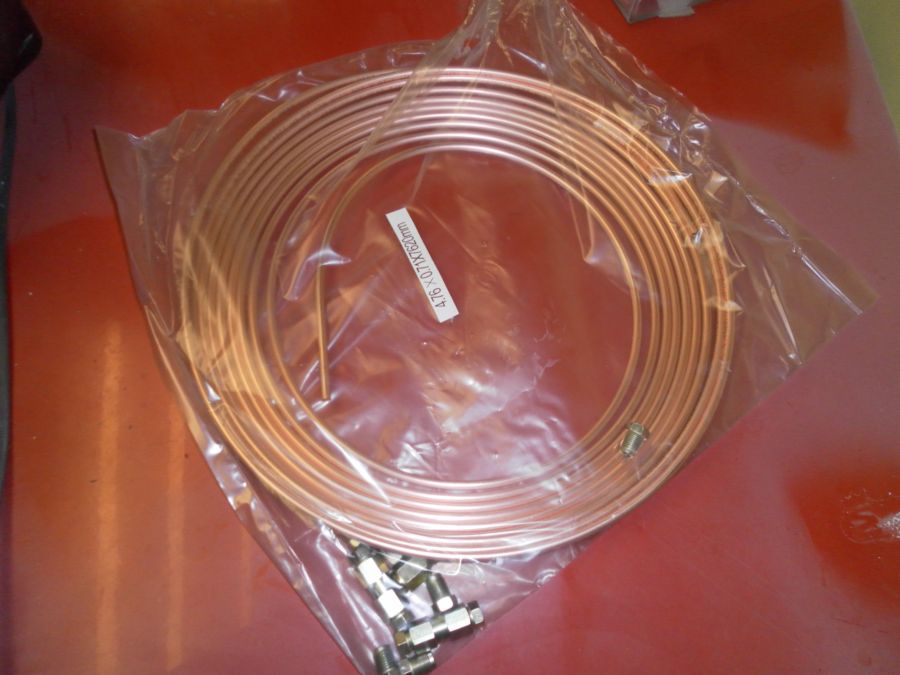 It wasn't long before I needed new rear flexi hoses as well because the old ends were so badly rusted on they weren't for budging. 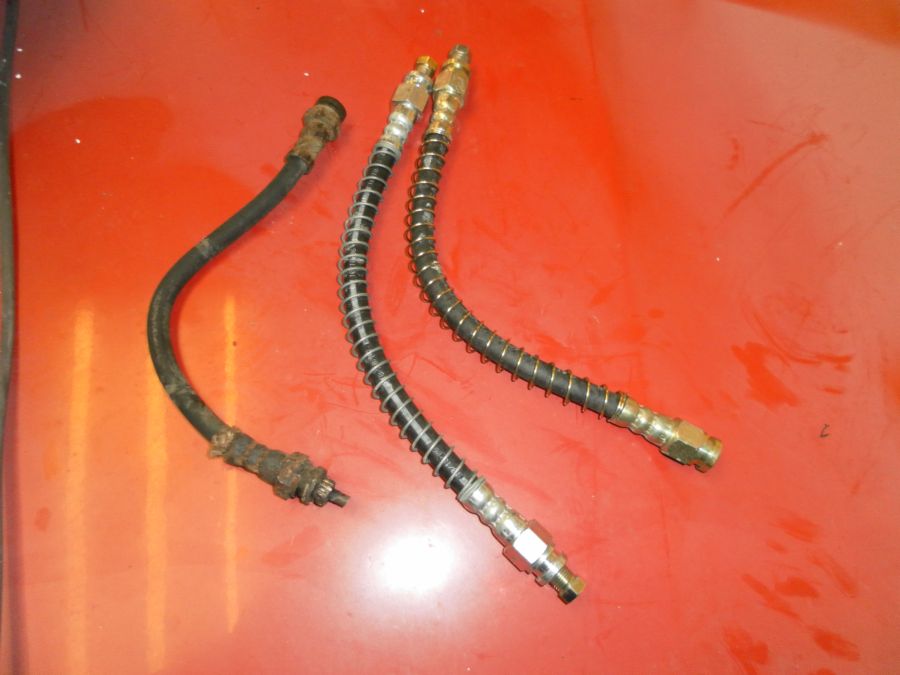 Things didn't get any better as the day wore on because the only way I was going to get the pipe ends out of the rear balance block was by taking the block off, and to do that the exhaust had to come off. What a job it was turning out to be. 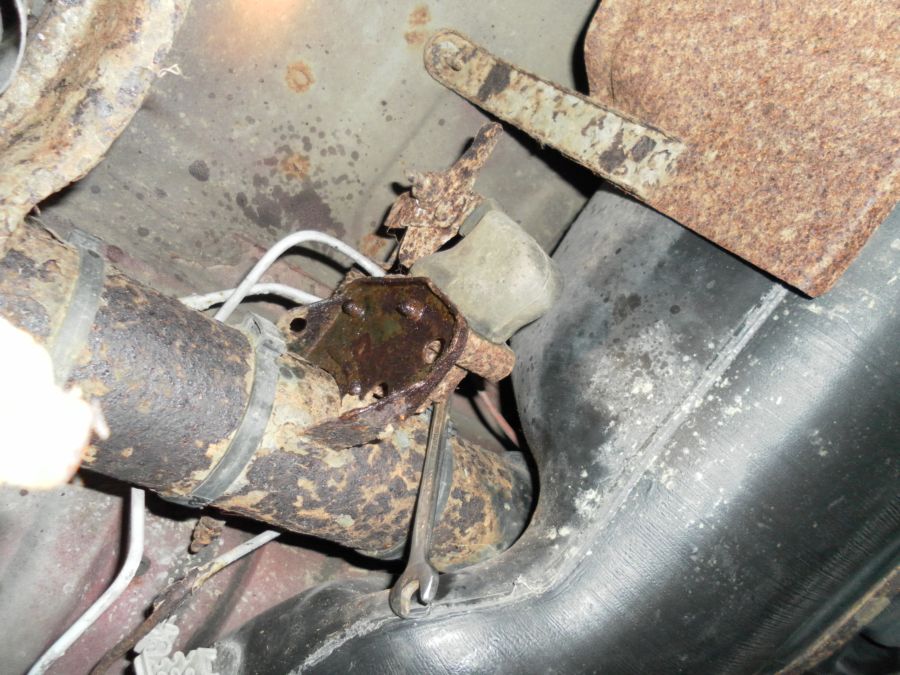 Even when I had the block out I had to be very careful about removing the ends. It did help in one way as it meant I was able to check the block was ok. 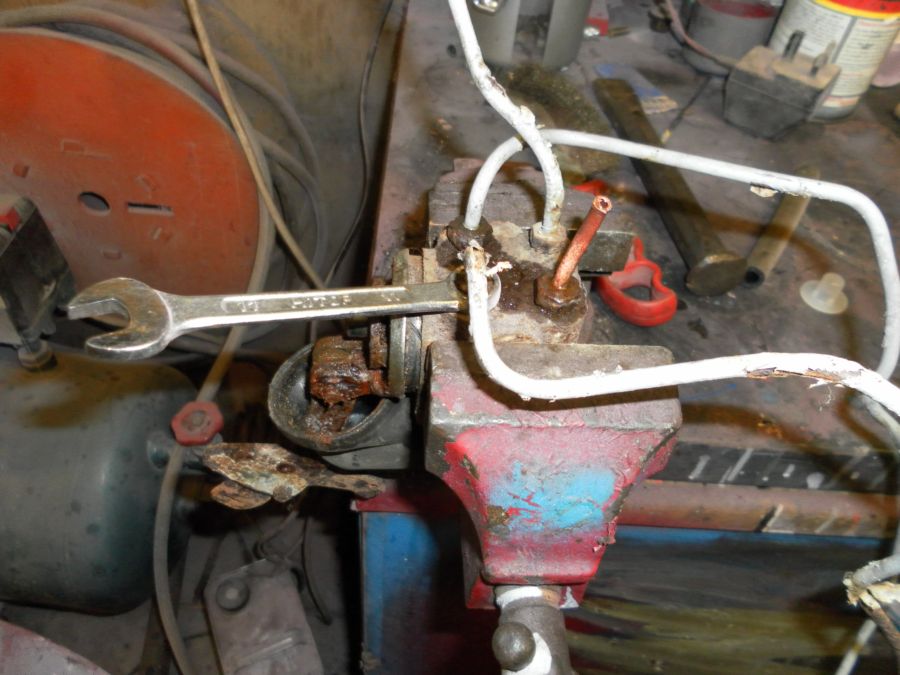 A long dirty job that took most of the day and this was what I was left with to show for all the work, a pile of rusty pipes. Thank goodness tat jobs done. Oh and for good measure I wax protected the whole underneath while I was under there. 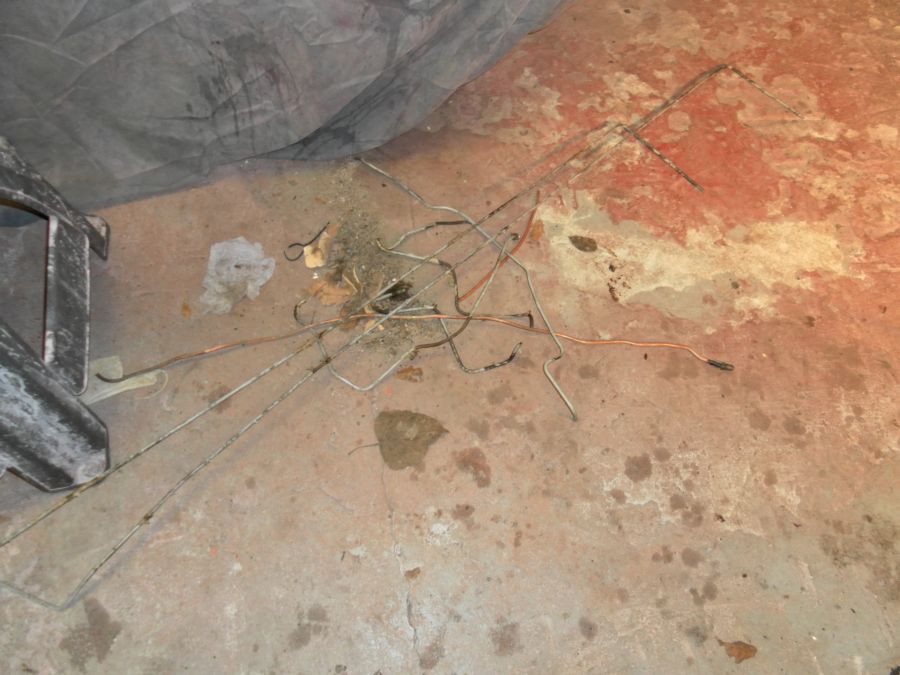 05/03. Finally got a chance to get the interior and outside cleaned as well as sort out a leaking petrol pipe and burst tail light bulb so I think the car is wipers and headlight allignment away from mot time. It was actually a nice dry day so I got a couple of decent photos. 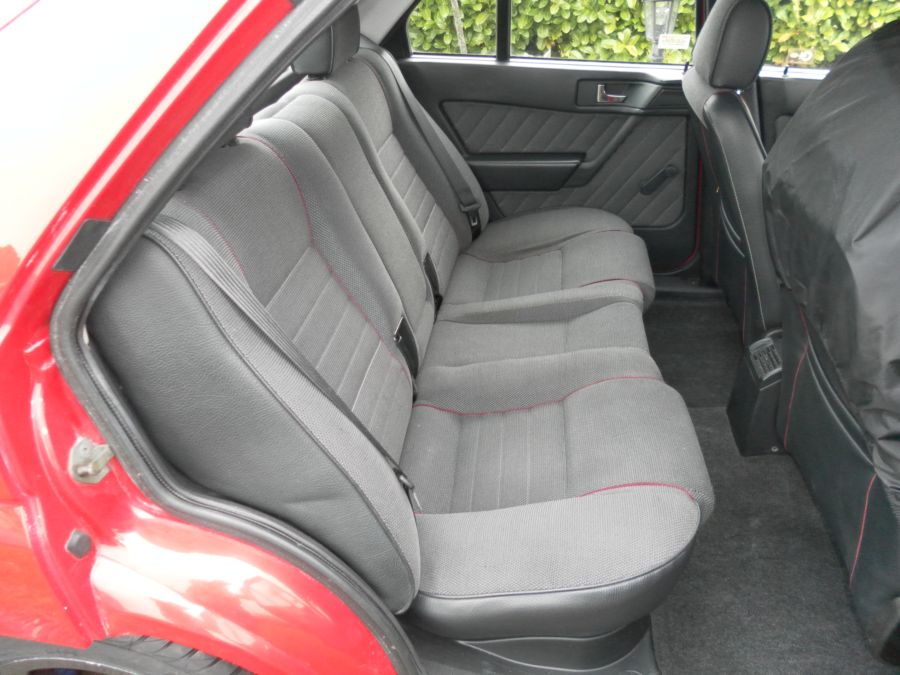 I always have a plastic cover over the drivers seat of my cars as I want to keep them good. 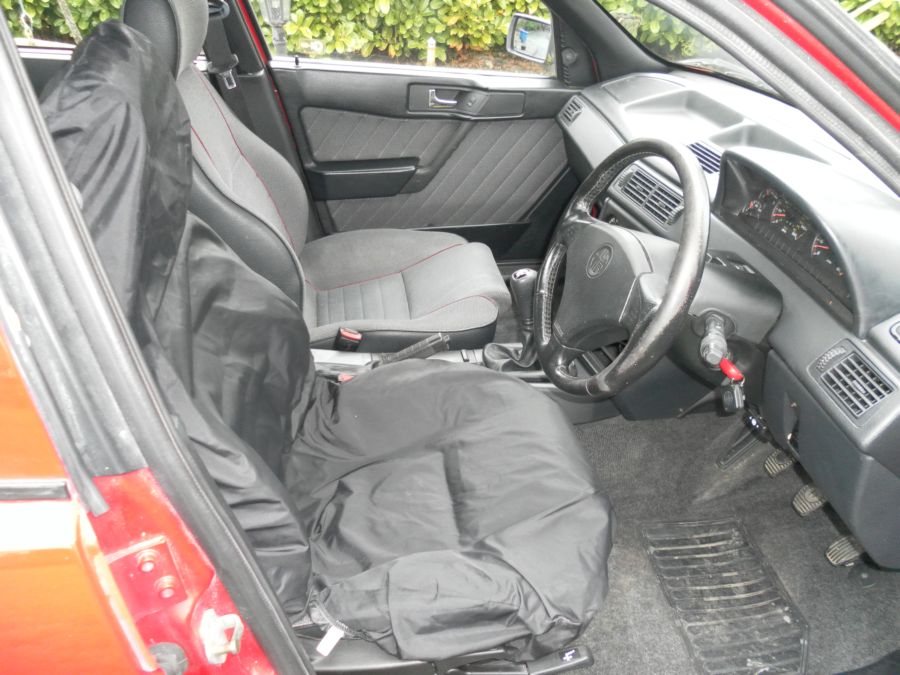 The engine bay is starting to clean up. I'll just tinker with it as I get time. 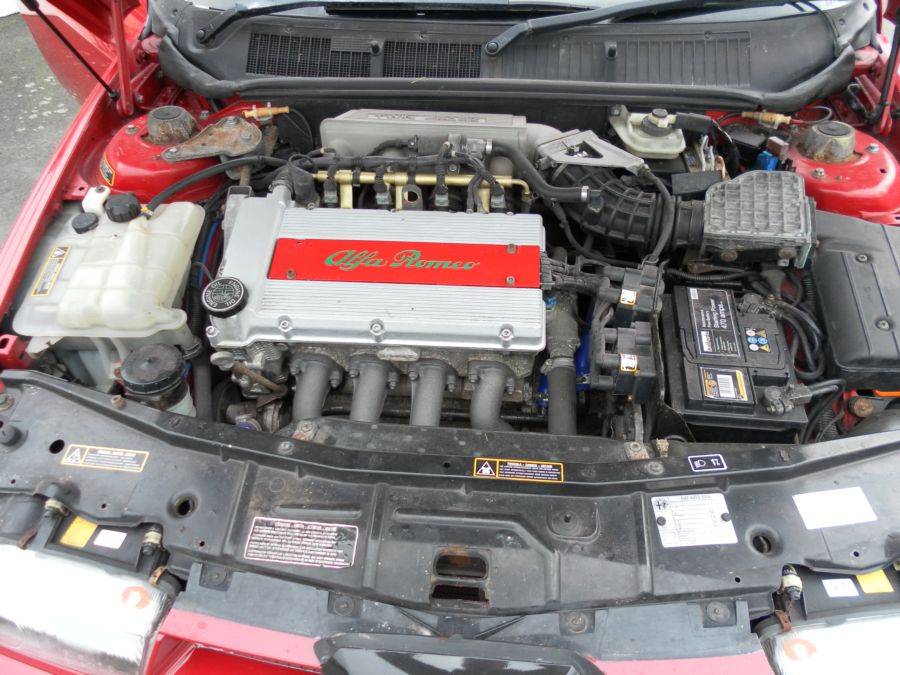 And the outside. I know the paint isn't a perfect match. I'm intending to use the car as an everyday runabout so I just wanted it looking decent rather than done to well then afraid to use it. 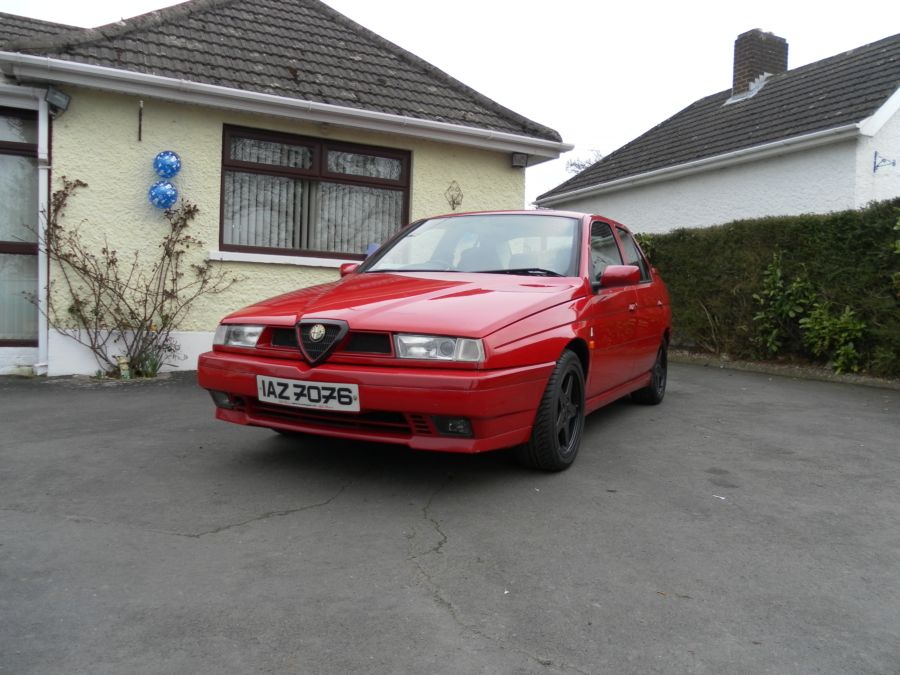 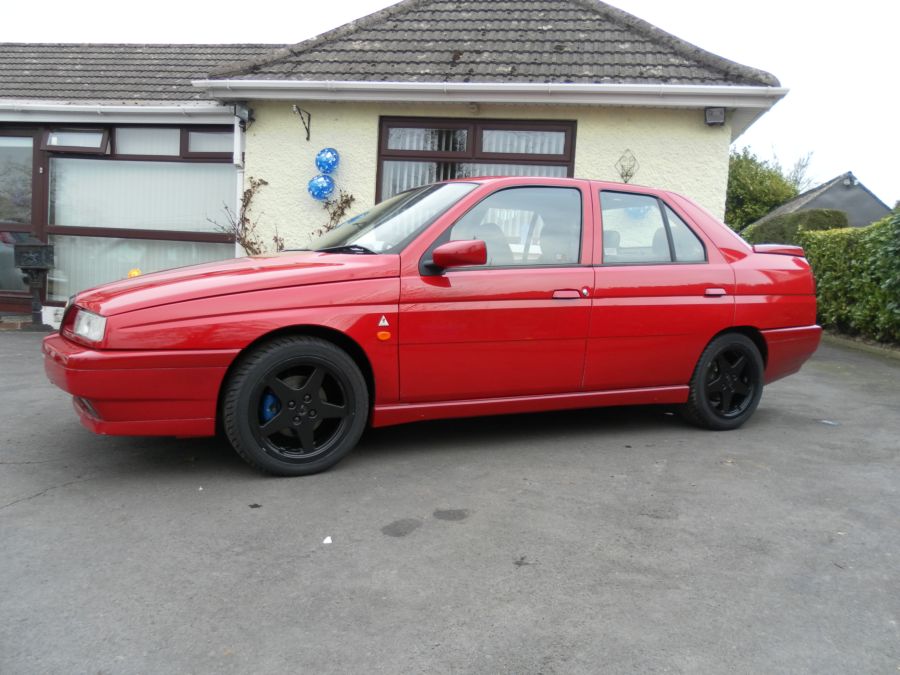 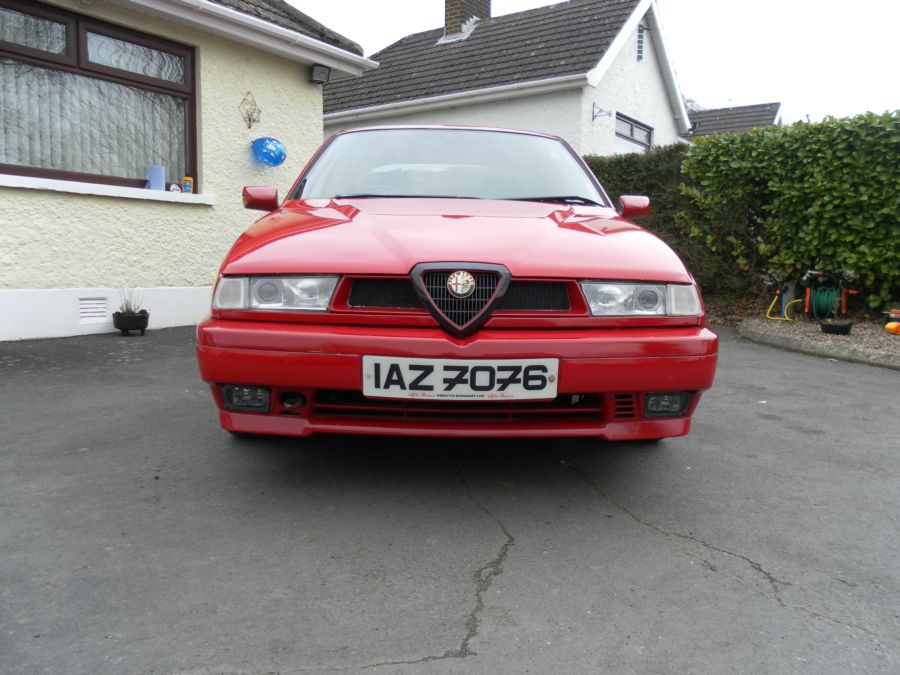 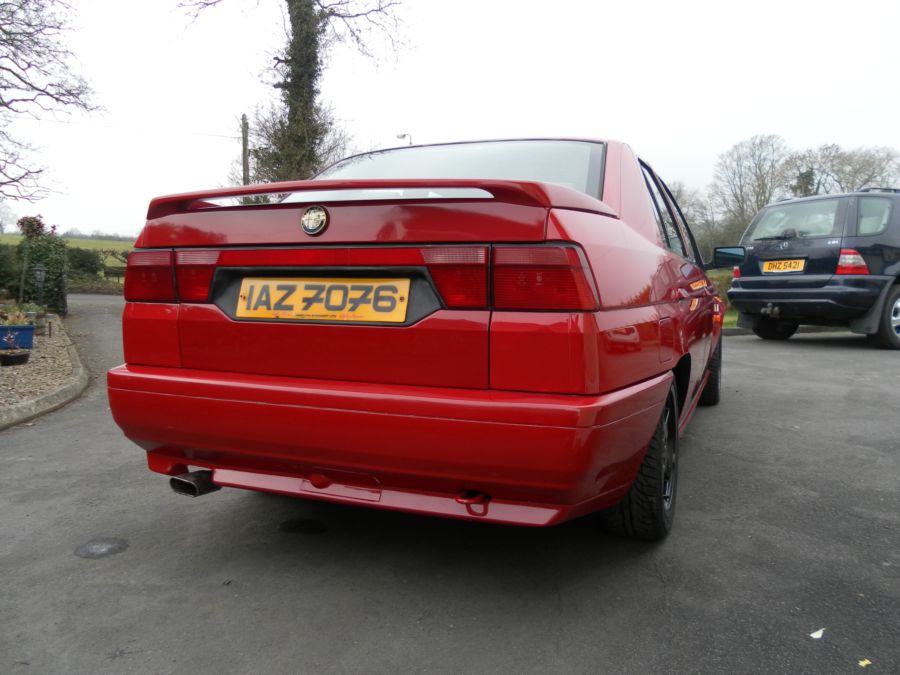 25/03. MOT day. Headlights were done yesterday so no reasons left to hold off. Over I went, the car drove beautifully, and, passed with not one issue. All the work paid off.

26/03. Our club had arranged a day with a firm called Dent Devil today to get some of the little dings taken out of their cars. I had planned on taking the Mercedes but after the 155 passed the MOT so easily I decided to take it and get a few dents removed. I'm glad I did because the guys did a fantastic job. I got 3 doors sorted and one of the doors had a particular little dent that really stood out, not a problem to them. And now I have a 155 with very straight panels. £90 well spent in my eyes.

So that's the car ready for the road. I finished things off by fitting my new Italian style plates. I know they aren't 100% legal but we'll see how things go. I think they set the car off.

19/03. Out of the blue the owner of a 155 2.0 TS contacted me as he was scrapping his car. Long story short some money changed hands, thanks Alan, and home it came today. Alan owned it over 10 years and looked after it very well, there's a pile of bills with it. It was to be for parts for the red 155 but its to good to break so I'll put it away and see how it goes. 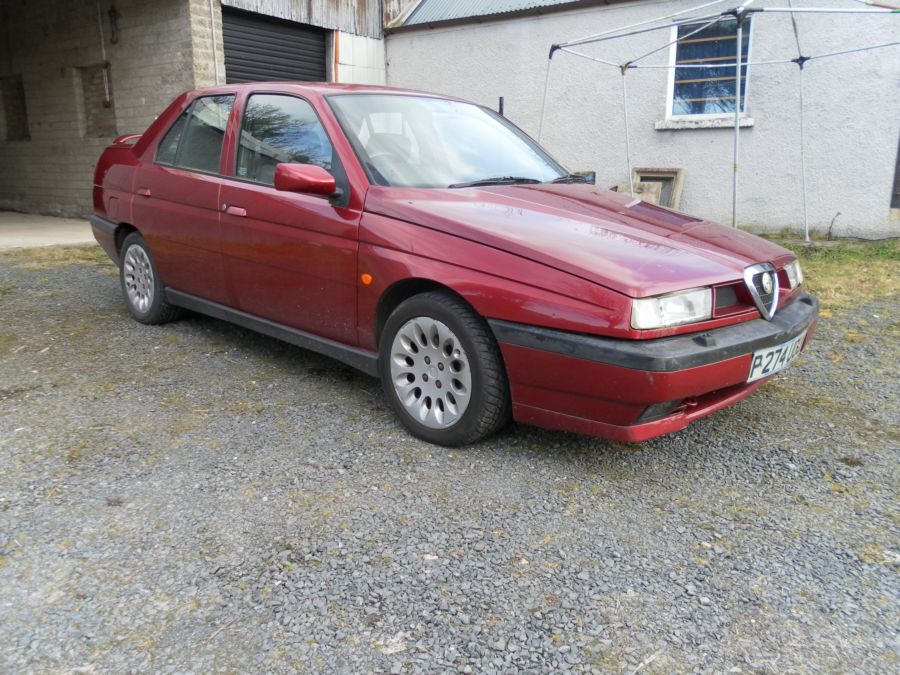